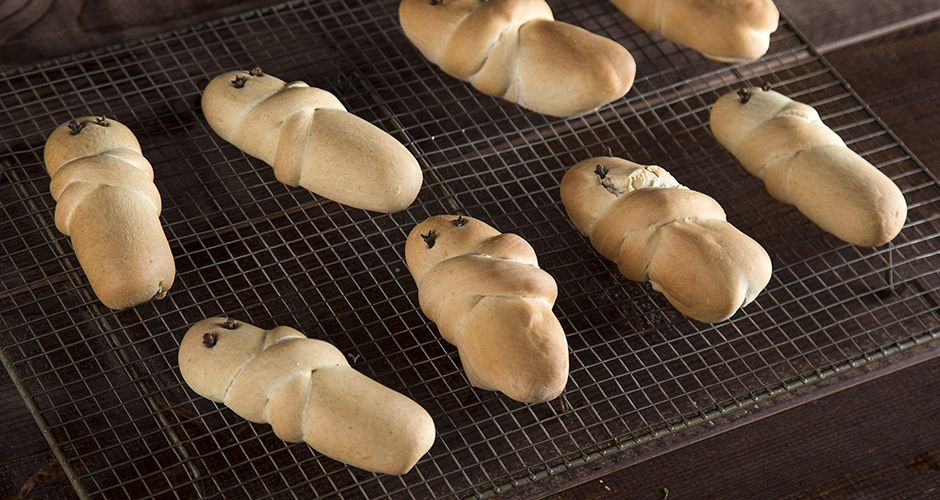 Lent is almost over… For some people it ends this Sunday which is Palm Sunday.

One of the Greek traditions is to make a figurine of Mrs. Lent (Kira Sarakosti) with ornament salt dough and give her 7 little feet at the bottom. She serves as a type of calendar and starting from Clean Monday they break off one little foot each week up until Holy Week. So Mrs. Lent’s last little foot has been broken off and we are venturing into Holy Week…

I love Easter… I think it is the nicest holiday of the year. It comes around during spring, the nicest season of the year in Greece, for me at least. Both these things make for a great combination. Easter has such a long history and a long list of traditions.. so I really don’t know what to share with you first!

Lazarus Saturday really made an impression on me as a child… They would tell us the story at school and there is no doubt that as far as miracles go, it is quite more advanced than the transformation of water in to wine miracle at the Marriage at Kana at Galilee or even walking on water.

It is an amazing thing for someone to have the ability to conquer death. Apart from Jesus’s very own resurrection, the resurrection of Lazarus is the greatest of all miracles.

Let’s start from the beginning though..

Jesus had a very good friend, Lazarus, who lived in the village of Bethany which is just outside of Jerusalem. Lazarus lived with his sisters and Jesus had stayed there house many times. He was 30 years younger than Jesus.

At some point Lazarus fell sick and his sisters had asked Jesus to come and see him… Jesus didn’t go visit him immediately on purpose. Lazarus died and after four days Jesus told his disciples that they would now go and awaken him.

When they got to Bethany, Jesus consoled Lazarus’s sisters and asked them to take him to their brother’s tomb. He asked for the stone sealing the tomb to be moved and summoned Lazarus to come out… Lazarus did just that and he appeared completely alive at the entrance of the tomb, still wearing his shroud.

You can imagine how impressionable this act was to the people during those times, especially to the Jewish community that attended church... Imagine how many of them felt threatened by Jesus and how they must have pursued Lazarus after this.

It isn’t so strange that Lazarus left there and went to Cyprus to carry on with his life. He went to the city of Kition where he taught the word of God and he became the first Bishop in Kition. There he lived for another 30 years until he died at 60. He was buried there, until part of his remains were moved to Constantinople in 900 A.D and where a large temple was built for him… the church of St. Lazarus. There, the Emperor would attend on Lazarus Saturday.

Tradition says that Lazarus never laughed again for the rest of his life.. maybe because he knew what comes after… The only time he laughed was when someone stole a pot from him and he said loudly… one “dirt” steals another “dirt”.. .

Any way you look at it, when someone goes through such an amazing experience, he is changed for life.

In Greece, Lazarus Saturday is a very important day. In many areas of Greece they bake Lenten breads that look like little people dressed in shrouds. These little breads are called “lazarakia” (Little Lazarus’s) and I have the recipe for you here! In other areas of Greece they make them with a nut and dried fruit filling…

In some areas they sing carols on this day. The carolers were girls that would first go to pick flowers, decorate small baskets and fill them with the various goodies given to them when they visit the houses and sing to them.

The next day is Palm Sunday, which commemorates Jesus’s triumphal entrance into Jerusalem. And that is how Holy Week begins.

Theoretically, fish can be eaten on Palm Sunday and some people say that you can even eat eggs. I say theoretically because some people feel that the only day fish is allowed is during Lent is on the 25the of March, the Annunciation of the Virgin Mary.

I hope you share these traditional recipes with your children. I feel that it is so important for all of this knowledge and history to be passed on from generation to generation. So I hope you all try the “lazarakia” (Little Lazarus’s) and tell us your impressions!